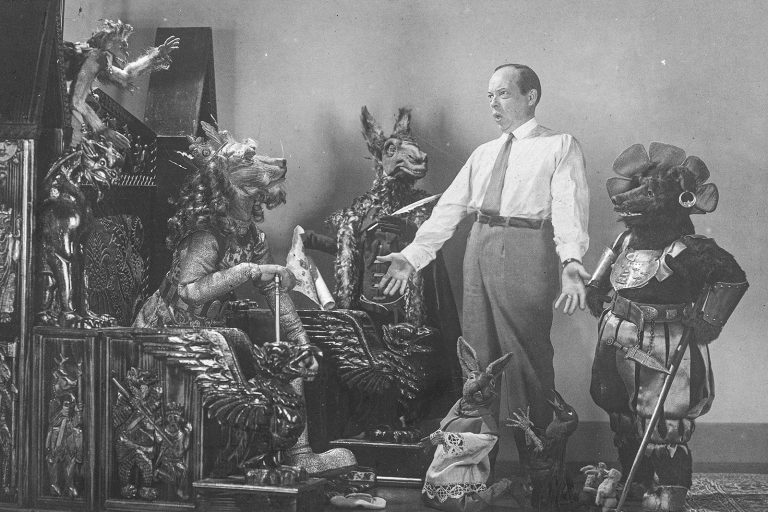 It was in Kaunas where the ‘European Disney’ Vladislovas Starevičius (Wladyslaw Starewicz) (1882-1965) started his film-making career.

Starewicz became world-famous as the pioneer of stop-motion animation and a wonder-worker who was well ahead of his time. In his films, he created the magical world of puppets, in which animals, birds, insects and other living creatures tell human stories like real actors. They ‘acted’ so convincingly that the audiences of his first films were convinced that Starewicz was taming live insects. Filmmakers of the time named Starewicz the Alchemist of the cinema. Among his fans was the Russian tsar and Walt Disney himself.

Starewicz’s techniques of animation are still a mystery even for contemporary world-class animation professionals. Just like the creator’s personality – cosmopolitan, mysterious and provocative.

On 8 August 2007, to mark Wladyslaw Starewicz’s 125th anniversary, a commemorative plaque (author – artist Jurgita Gerdvilaitė) was unveiled on the building where Wladyslaw Starewicz used to work (Rotušės a. 18). It reads in Lithuanian and English: “In this building, previously the Museum of Kaunas City, Wladyslaw Starewicz (1882-1965), began his career as a cinematographer. He was the first in the world to create masterpieces of puppet animation”.

By the end of 2014, next to the commemorative plaque, metal sculptures of insects were unveiled, depicting the three main characters of the animated films made by Starewicz – the stag beetle, ant and grasshopper. The sculptures were made by blacksmith Zenonas Baranauskas.